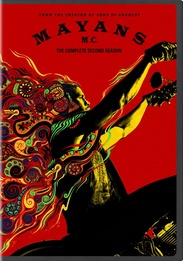 Mayans M.C. is the next chapter in Kurt Sutterâs award-winning Sons of Anarchy saga. The complete second season.

Set in a post-Jax Teller world, Ezekiel âEZâ Reyes (JD Pardo) is a prospect in the Mayans M.C. charter on the Cali/Mexi border. Once the golden boy with the American Dream in his grasp, EZ is trying to reconcile with his brother âAngelâ (Clayton Cardenas) while searching for the truth behind their motherâs death. Meanwhile, their father âFelipeâ (Edward James Olmos) is struggling to lead his sons down a righteous path.