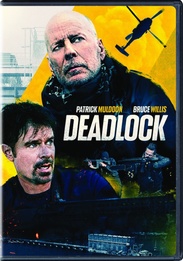 Bruce Willis stars as Ron Whitlock, a wanted criminal leading a team of mercenaries on a mission of vengeance. Convinced that the government is working against them, the merciless group brutally seizes an energy plant and holds everyone inside hostage. With a nearby town on the brink of massive flooding and destruction, itâs up to one retired elite army ranger Mack Karr (Patrick Muldoon) to save thousands of innocent lives before itâs too late.

Rated R for violence, language throughout and some drug use.