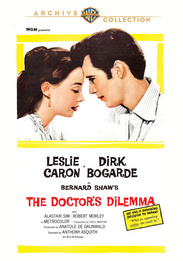 Adapted from the play by George Bernard Shaw and directed by one of Shaw's foremost film interpreters, Anthony Asquith (Pygmalion), The Doctor's Dilemma fizzeswith wit and bites with intelligence. The story takes a swing at the pomposity of the medical establishment as it follows a doctor who has the resources to cure just one patient: either a kindly, penniless fellow physician or a brilliant, unscrupulous artist. A complication: the doctor falls for the artist's lovely wife, who is unaware of her husband's true nature. Celebrated for its rich Edwardian interiors and for Cecil Beaton's(My Fair Lady) glorious costumes, the film also boasts a 24-carat cast: Dirk Bogarde as the philandering artist, Leslie Caron as his deceived wife, and a who's-who of British character stars Alastair Sim, Robert Morley and Felix Aylmer as hilariously selfimportant, self-deceiving lords of Harley Street.