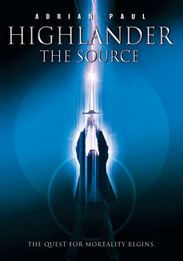 Immortals, they have secretly dwelt among us for thousands of years but their origins have been shrouded in mystery. The answers, prophets say, are to be found in The Source. The last band of eternal warriors, lead by Duncan MacLeod, the Highlander, have set out on a treacherous quest to find the origin of their immortality. But to learn the truth, they must first defeat The Guardian of the Source, a powerful killer who will destroy all who seek its secrets.

Rated R for violence and some language.