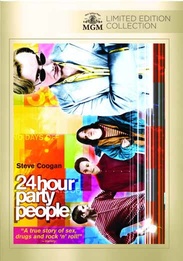 This witty and compelling portrait of the eighties music scene is viewed through the eyes of Tony Wilson: a young Cambridge graduate and TV presenter, who, inspired by the Sex Pistols first Manchester gig, founds the now world-famous Factory Records and the Hacienda nightclub. The bands he signs include Joy Division and The Happy Mondays - who became seminal artists of their time - whilst the Hacienda transforms Manchester - a declining industrial city into "Mad-chester" - the place to be.

Rated R for strong language, drug use and sexuality.