I Could Never Be Your Woman 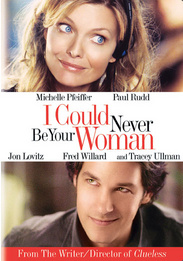 Michelle Pfeiffer (Hairspray) and Paul Rudd (Knocked Up) star in this hilarious romantic comedy for the ages. Rosie (Pfeiffer) is a 40+ successful-but-divorced TV producer and single mom who falls for the charming new 29-year old actor (Rudd) on her show. When their relationship gets hot and heavy, Rosie must come to terms with the not-so-easy reality of dating a younger man. From the writer/director of Clueless and Fast Times at Ridgemont High â and featuring Jon Lovitz, Tracey Ullman and Fred Willard in uproarious supporting roles -- I Could Never Be Your Woman is a witty, fun-filled romp that proves once and for all youâre only as old as you feel.