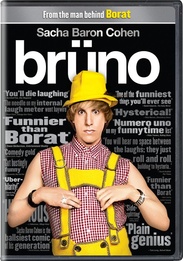 Golden Globe-winner Sacha Baron Cohen (creator/star of Borat and Da Ali G Show) is at it again as he brings his most over-the-top character to life in the comedy that has started more conversations, generated more controversy and dared to go further than ever before! As BrÃ¼no travels the world in search of fame, no one â whether they are celebrities, politicians or even terrorists â will be spared from his signature sense of style and his wickedly off-kilter manner! And, yes, they are all real situations!