'Hangover' vs. 'Up' for Best Picture, what are the odds? 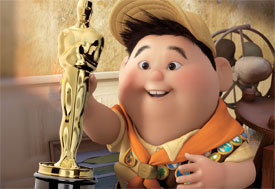 Back in 2008, when WALL-E failed to garner an Oscar nomination for Best Picture, there were some grumblings, but most people accepted it given that animated movies have their own "Best Picture" category. But last year, when The Dark Knight was snubbed, the grumblings turned into full out screams and derisive blog posts calling for change.

Well, the Academy of Motion Picture Arts and Sciences took notice and in an effort to appease its vocal constituents, they made the decision to double the amount of Best Picture nominations from five to 10. And because anyone will find fault with just about anything, the debate moved from honoring worthy films to the potential (gasp!) of watering down the nominations with films that weren't up to snuff.

Even as recently as a couple of months ago, I pondered whether there were actually 10 worthy movies to nominate. Now, granted I did sort of miss some obvious locks for Best Picture nominations like The Hurt Locker and Up in the Air and even mocked the potential inclusion of Avatar (yep, that's called egg all over my face), but I think the question is still a fair one.

This morning, my colleague Tim and I debated (albeit not fiercely) whether it would be more likely that The Hangover or Up would get a Best Picture nomination. Of course, it's possible that with 10 nominations they could both get one, but I think it will be a shame (or is that sham?) if neither of them do.

First, let's get the locks out of the way. Looking at the various awards already given out these four films are all but guaranteed to be among the 10 movies nominated for Best Picture this year.

And now, we present our odds on favorites to snag the remaining six nominations. Of course, the Academy does like to throw a curve ball every now and then, but we feel reasonable sure that the final 10 will include movies from above and from the following list. We also included our completely fabricated odds as a point of reference as to how sure we are that each movie will get a nomination.

So, how did we do? Did we miss any obvious or long shot nominees? Did we nail the odds or is there a bet you'd love to take with these odds?