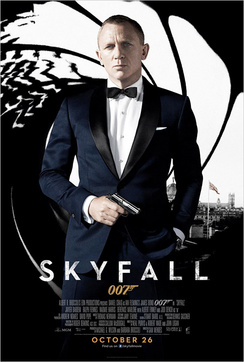 When it rains, it pours and unless you're a relatively famous puppeteer for arguably the world's most recognizable puppet, that's a good thing. There's so much going on today in Hollywood that's it like the floodgates have opened and Russell Crowe has his ark ready and waiting.

Yes, believe it or not, days like today make coming back to work on those dark and miserable Mondays all the more merrier. So, kick on back, grab a cup of Joe and enjoy this week's MMM.

I promise you that it's worth the long wait of the weekend. Unless of course, you work for the government. In that case, roll out of bed around noon on your day off and give thanks to those service men and women who give us the freedoms that we enjoy on a daily basis.

Either way, it's always important to remember those who valiantly fought and continue to fight on our behalf. Do them proud and enjoy your MMM.

When it comes to aging well, there is no better poster "child" than Bond. James Bond. Skyfall opened to a robust $87.8 million, easily besting Quantum of Solace's $67.5 million for best Bond opening ever.

Daniel Craig really does live up to his moniker as the fairest Bond of all as it is a given that Skyfall will join Quantum of Solace and Casino Royale (his other turns as Bond) as the highest grossing Bond films of all time. In fact, I'm pretty sure that Skyfall will easily surpass Quantum of Solace's $168.3 million to become the highest grossing Bond film of all time.

This weekend wasn't only about Bond though, overall the top films improved by nearly 30% on the same frame from last year. Strong holdover numbers from Wreck-It Ralph, Flight and Argo helped to compliment Skyfall's opening.

The other story from this weekend was the strong limited release debut from Lincoln. The serious awards contender opened on only 11 screens, but still almost brought in a million dollars. The per screen average of $81,818 was good enough for third best this year and 25th all-time.

Lincoln gets its wide release next weekend and the battle for second place between it and Skyfall should be an entertaining affair. Those films will pander for the adult audiences while their kids will all flock to see the final chapter in the The Twilight Saga, Breaking Dawn - Part 2.

This story really hits home for me as my daughter in the throes of a serious Sesame Street crush. It is the one thing in our house that will immediately stop any temper tantrum in its tracks.

According to TMZ and other outlets, Kevin Clash, the puppeteer who created and voices Elmo, has taken a leave of absence from Sesame Street amid allegations that he was involved in a sexual relationship with 16-year-old boy.

Clash has admitted to having a relationship with the young man (now 23) but that it began after he was an adult. Sesame Street claims that Clash is the one who asked for the leave in order to restore and protect his reputation.

Meanwhile, the show will go on as Sesame Street claims that "Elmo is bigger than any one person and will continue to be an integral part of Sesame Street to engage, educate and inspire children around the world."

You might remember Kevin Clash from the documentary Being Elmo: A Puppeteer's Journey that released on DVD earlier this year. You can check out the trailer below.

How awesome was John E. "Jack" Jones? He was so awesome that in lieu of flowers, he wanted his friends to go out and see the James Bond film Skyfall when he died on November 3.

The irony is that the man who must have been a huge Bond fan never got to see the latest chapter himself as his passing predated the U.S. release by almost a week. Perhaps ole Jack will take solace in the other world with the knowledge that a great many of his "friends" did indeed go out and see it this weekend.

You can check out the obituary for yourself below: 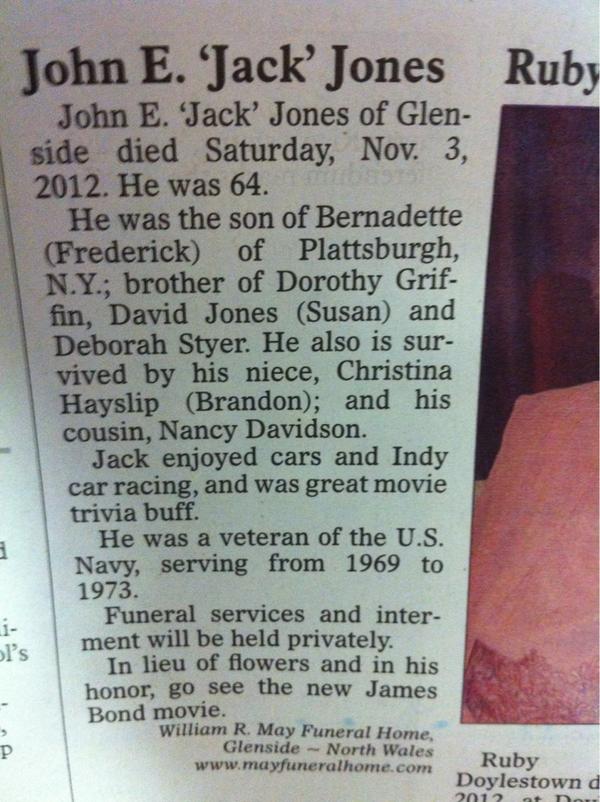 This is a great idea and one that I might just have to borrow when I meet my ultimate demise. Here's to hoping that I don't die right before the release of Magic Mike 13 or something.

In case you missed our update on the story from last week, LucasFilm released a statement over the weekend (odd time for that if you ask me) that did indeed confirm that Little Miss Sunshine writer Michael Arndt will pen the script for Episode VII based on his treatment.

As pre-production of Star Wars: Episode VII begins, Lucasfilm has confirmed that award-winning writer Michael Arndt will write the screenplay for the new Star Wars film. As revealed in the ongoing video series posted here on StarWars.com, Kathleen Kennedy and George Lucas have begun story conferences with Arndt. Arndt won an Academy AwardÂ® for Best Original Screenplay for writing Little Miss Sunshine (2006), and was nominated for Best Adapted Screenplay for writing Toy Story 3 (2010).

While I do like the fact that they are turning to a bit more polished hands to write the films this time around, I will remind everyone that Ben Affleck and Matt Damon also own Oscars for Best Original Screenplay. And let's face it, I don't think anyone wants to turn those two loose on Little Miss Sunshine.

Although on second thought, I always thought Star Wars was lacking in terms of Boston accents.

Dead, but not Quite the Undead

There was another crazy influx of trailers this past weekend and we just couldn't keep up with all the Star Wars news. The trailer for Warm Bodies is one that stood out to us.

We get it. There are a ton of zombie movies in the pipeline. It seems that they have overtaken the vampire as the genre of the moment with the kids and that's cool, because it's a fertile ground with a lot of room to play.

Yeah, I noticed the irony there too. Well, just when you thought you've seen everything possible when it comes to zombies, along comes Warm Bodies.

Watching the trailer, the film that immediately springs to mind is Zombieland given the same general subject matter and the tone of the films. I guess you could call it Zombieland from the zombies' point of view.

While the concept of zombies getting "cured" through love could easily be over-the-top cheesy, it seems that they hit all the right notes with this one. And come on, it has Malkovich and the always lovely Teresa Palmer... well, always lovely now.

Warm Bodies will warm your heart this Valentine's Day when it hits theaters on February 1, 2013.

So, who out there thought that the Governator's acting comeback died with the uncovering of his extra-marital dalliance? Yeah, I didn't really think anyone thought that either.

Just like President Clinton and his cigar, it would appear that Arnold Schwarzenegger is back and better than ever after leaving politics and Maria Shriver behind. I'm not a huge Schwarzenegger fan, but if there's one thing that he does well, it's over the top action.

Let's set aside for a moment all the instances of criminal suspension of disbelief in the following trailer and simply enjoy it for what it is. What it might be is the signal that Schwarzenegger might be able to enjoy a bit of acting in his twilight years.

The Last Stand barricades itself in theaters on January 18, 2013.

In news that came totally out of right field, director Michael Bay announced that former leader of the Funky Bunch, Mark Wahlberg will be headlining Transformers 4. This news immediately reminded me that yes, there will be another Transformers film and, apparently, that Mark Wahlberg is still alive.

When series star Shia LaBeouf announced that he was leaving the franchise, little did we know that Marky Mark would be taking up his "slack." At least now we won't snicker too much when Megatron faces off with Wahlberg. With his six-pack (and then some) abs, he'll at least look the part as someone who could go a round or two with a transforming robot.

Who are we kidding? This franchise jumped the shark when they had model-turned-terrible-actress Rosie Huntington-Whiteley square off against Megatron and live to see another movie. Oh wait, that's right, she hasn't been in a single thing other than Transformers: Dark of the Moon.

In case you're still reading this, you'll be happy to know that Mr. Bay also released the first logo for the upcoming, unnamed movie. You can see it below. 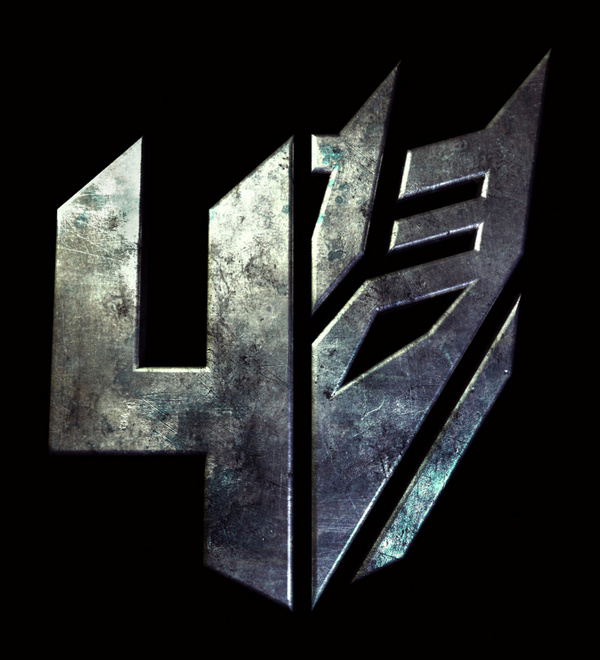 We couldn't leave you today without one last little bit about Star Wars. In case you don't watch Conan O'Brien (and from the ratings, it's probably a good bet you don't), you probably aren't aware that he's doing a series looking at what a Star Wars film would look like from say the likes of Wes Anderson or Todd Phillips or Kevin Smith.

Check them out and enjoy. Until next week, mix well!