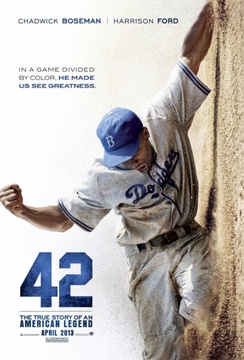 I really tried to stay away from the obvious headline you see above, but I swung and miss so many times, I finally just gave in to it. I have to say that I'm pretty shocked by 42's performance as I was thinking it would struggle to get to $20 million.

I guess this country really does love its baseball. Either that or they really want to see Harrison Ford in more films. Surprisingly, it has been almost exactly two years since last we saw Ford at the megaplexes with megaflop Cowboys & Aliens.

If indeed audiences are warming back up to Ford, then it would only be welcome news to his other films opening this year, Ender's Game and Paranoia. You might remember Paranoia from my list of sleeper hits for 2013.

Either way, it's nice to see the box office up and warming up for the big Summer months ahead. It's also nice to know that not all of the kookiness has left Hollywood, but we'll talk about the MTV Movie Awards in a bit.

For now, sit back and enjoy another MMM or MAM or whenever I get this out.

As hinted above, everything came up roses for 42, the story of Jackie Robinson's ascension to Major League Baseball and the breaking of the color barrier. Shockingly, not only is 42;s $27.3 million opening more than Moneyball, but it's also the highest opening ever for a baseball film. That's pretty impressive.

Initially projected to hit $20 million in its initial weekend by the most optimistic of projections, 42's performance was certainly an 0-2 swing for the fences that connected in more ways than one. There's really no path for this film to follow, but Moneyball ended up with $75 million.

I think that the encroaching Summer releases will hurt its performance potential, but I wouldn't be surprised to see 42 make a pretty nice lion's share of money in the next two weeks. I think that $100 million is a real outside possibility, but I'm thinking that it will most likely fall short in the $85 million range. Anything over $100 million will certainly be considered a grand slam (sorry).

At the other end of the spectrum is the disappointing performance of Scary Movie 5. I mean sure, it did debut in second place, but its $15.2 million weekend was considered a big flop by many pundits. If you consider that its predecessor raked in $40 million in its opening weekend, you realize just how far this franchise has fallen.

Looking at past performance, this is a franchise that has regularly gotten as much as 50% of its total box office on opening weekend, so a total box office in the $25-30 million range would be considered an epic failure and one can only hope the final death of this terrible series.

While sure, some might point to A Haunted House and claim that it cannibalized its audience, but you have to remember that A Haunted House only brought in $18.1 million its opening weekend, or $40 million total. Added together, both films still fail to live up to Scary Movie 4, so perhaps it is just another sign that these films need to end. Permanently.

Elsewhere, The Croods continued to bank money on the lack of real family competition at the megaplexes and brought in an additional $13.2 million to up its total to $142.5 million. It should easily skate past $150 million this weekend and it might even crawl up to $175 million thanks to smart scheduling on Dreamworks' part.

The Place Beyond the Pines continued its expansion to 514 screens, but it continued to see its per screen average hold steady. While it only landed in tenth place with $4.1 million, the future looks quite bright for this film. It looks to continue its expansion this weekend and a top five performance is a real possibility for this film.

Someone got drunk at the MTV Movie Awards

And believe it or not, it wasn't Lindsay Lohan. Well, she could have been drunk too, but the night's "Kanye honor" went to the lovable Aubrey Plaza who tried to steal Will Ferrell's thunder at the MTV Movie Awards in what may have been a planned stunt gone awry.

Or it could have simply been a miscalculated evening of drinking by Plaza. Either way, the result was the same, it actually reminded me that the MTV Movie Awards were on this past weekend and I probably wouldn't have even mentioned them today had this stunt not occurred.

Check it out below and let us know what you think about it.

As mentioned above, perhaps one reason that it caught me unaware was that MTV moved up the Summer movie shilling fest to April, you know to better get a jump start on Summer, just like the movies it blatantly advertises.

If you're into winners and losers, The Avengers had a pretty good evening snagging awards for Best Villain, Best Fight and the night's biggie Movie of the Year. The rest of the winners can be found here.

So, it comes with no surprise that I was tickled pink with today's message from Zod asking us to hand over Superman.

It seems that this announcement corresponded with a site coming live on the companion viral game. IWillFindHim.com is some sort of countdown that is allegedly pointing to something happening in 48 hours. I hope it's a new trailer.

Well, that's about it this morning. It's been a busy one already, what with this story and the Catching Fire trailer dropping. It's looking like a busy week. Enjoy it and mix well!