Our Predictions: The 2017 box office will be ruled by 'VIII' 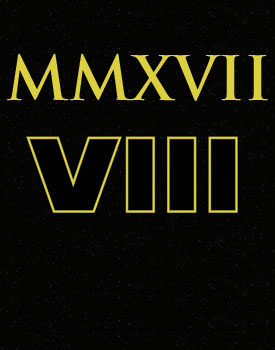 A new year is a time for new beginnings. The counter is reset to zero and everyone is back at the starting line.

Well, that's the idea at least.

At probably the exact moment that I'm typing this, Rogue One has officially become the highest grossing film of 2016. What that means is that for the second year in a row, a Star Wars film will top the box office.

Looking ahead to this year, we all feel that 2017 will be three for three and it won't even be close. To say that Disney got a bargain when it purchased LucasFilm for $4 billion would probably be crazy, but if they are able to continue this level of box office success for future Star Wars films, then we will look back and call it the best deal ever.

Heck, it's probably that already.

While Disney has been the highest grossing studio in each year that it has released a Star Wars film, it's not like their cupboard is otherwise bare. With Marvel, Pixar and their own animated films such as Frozen, Disney is a box office behemoth and shows no signs of slowing down.

Every year, we attempt to predict which films will top the box office and while we do a pretty good job at it most years, there are always going to be surprises. For instance, I was really high on The Jungle Book, going so far as to predict that it would finish in second place.

While I wasn't that off with its actual fifth place finish, Tim and Dannette both nailed the top three films, Star Wars: Rogue One, Finding Dory and Captain America: Civil War. Dannette even got the order perfectly.

After the top three films though, we diverged widely. We all missed badly on The Secret Life of Pets, which finished 2016 in fourth place. Deadpool was another surprise and only Dannette even included it in her top 15. As to the overall winner, Dannette, Tim and I eached nailed 11 of the top 15, but Dannette's faith in Deadpool is reason enough in my book to declare her the winner.

Turning our attention to this year, we had to recruit another colleague to replace Tim and It's my pleasure to welcome Noah to the team. Noah is a box office fanatic, so the expectation levels should be high. Looking at his picks, it seems that he will fit in just fine.

We all picked Star Wars: Episode VIII and Guardians of the Galaxy Vol. 2 to finish one-two and there should be at least two, maybe three more Disney films in the top 15. Warner Bros. might be able to give Disney a run for its box office money with Justice League, Wonder Woman and The LEGO Batman Movie coming out, but I'm pretty sure that the latest Star Wars film will once again carry Disney to yet another studio market share victory at the box office.