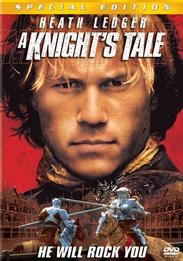 The timeless tale of William (Heath Ledger) and his band of medieval misfits - including serious, soft-hearted Roland (Mark Addy), hot-headed, flame-haired Wat (Alan Tudyk) and unemployed writer Geoff Chaucer (Paul Bettany) - careening towards impossible glory, A Knight's Tale is the oddball, sometimes awe-inspiring story of a rookie discovering if he is the stuff of which legends are made. Part road trip, part romance, part exuberant action-adventure, the film is a rich, romantic, raucous ride during which a young squire embarks on a quest to change his stars, win the heart of an exceedingly fair maiden (Shannyn Sossamon) and rock his medieval world.