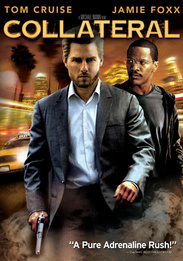 A dangerous game of cat and mouse ensues when a hired hitman is contracted to kill the key players in an upcoming trial against a drug kingpin. The hitman's usual M.O. becomes compromised when the cab driver that he hires to shuttle him around Los Angeles becomes wise to the killer's true intentions.

When the hitman turns his sights on the beautiful attorney that the cab driver met earlier in the evening, the cabbie must rely on all of his wits and knowledge of the city to save them both.

Rated R for violence and language.